To share your memory on the wall of Blas Stancic, sign in using one of the following options:

Provide comfort for the family of Blas Stancic with a meaningful gesture of sympathy.

Blas S. Stancic, age 82 of Bloomfield, passed away on Sunday, July 7th, 2019. Born in Oriente, Cuba, Blas lived in Newark before coming to Bloomfield 8 years ago. He was the son of the late ... Read More
Loving Husband, Father, Brother & Grandfather

Blas S. Stancic, age 82 of Bloomfield, passed away on Sunday, July 7th, 2019. Born in Oriente, Cuba, Blas lived in Newark before coming to Bloomfield 8 years ago. He was the son of the late Miguel and Ana (Espinosa) Stancic. Blas was a painter for Bayonne & Barrel Drum Co. in Bayonne.

He is survived by his wife, Maria C. (Alvarez) Stancic; daughter, Zuzel Rodriguez and her husband Carlos; sister, Isa Stancic; and his grandchildren, Briana Rodriguez and Adam Rodriguez. Blas is predeceased by his brother Carlos Stancic.

Relatives and Friends will be received at the S.W. Brown & Son Funeral Home, 267 Centre St. Nutley, on Saturday, July 13th from 9am to 11am.

A Funeral Mass will be celebrated at 11:30am at St. Peter’s Church in Belleville.

The cremation service will be private.
Read Less

Receive notifications about information and event scheduling for Blas

We encourage you to share your most beloved memories of Blas here, so that the family and other loved ones can always see it. You can upload cherished photographs, or share your favorite stories, and can even comment on those shared by others. 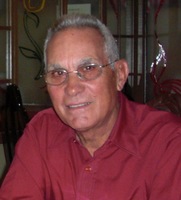